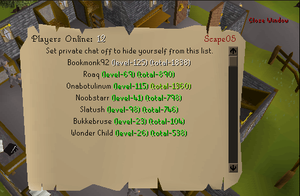 Scape05 is a Runescape 2 private server wich currently is in early access, during early access things are subject to change. Early access gives us developers time to develop and expand Scape05. All while you can enjoy the 2005 experience! Early access does NOT mean your account will be reset once early access is over.

Scape05 has been online since january of 2019 and is owned & developed by Mod Devenir.

You might notice that some things are not working as intended, or not at all! If you run into bugs or missing content please report this to our # bug-reports channel in our Discord server

There are quite some major differences. In the year 2005 Runescape 2 was very basic and plain, many players where still learning the game and being a noob was actually fun not knowing how certain things work or would end up. Scape05 offers the content up to the cache date wich is set to June 27 2005. Everything up to this date is going to be developed and added to Scape05. To refresh your mind a bit; here’s a list with global changes.

! indicates that this feature is not working

Scape05 will have all content up until June 27th of 2005. Everything after this date will not be added.

Because we're still in Early acces this means some things are unfinished or not implemented yet. Most quest items are available to use if yo meet the requirements tied to that quest. The same counts for certain guilds where you'd normally need the quest to enter the guild.